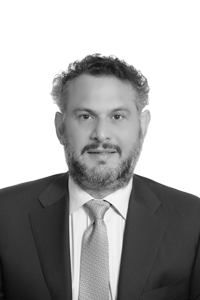 Sufian is an expert in commercial arbitration and constitutional law. He has acted for government bodies, multinational corporations and international financial institutions in complex international arbitration proceedings and has acted both as a party-nominated arbitrator and a sole arbitrator in disputes involving public and private clients, including the Ministry of Public Works and Housing, construction companies, and others.

Sufian is also a prominent researcher in constitutional reform, security sector reform, civil liberties and individual freedoms and is a founding member and President of the Arab Association of Constitutional Law.

Sufian is currently acting as local counsel to a project company in arbitration proceedings brought forward by the Jordanian Ministry of Water and Irrigation in a dispute worth over $400 million.

Prior to joining Obeidat Freihat, Sufian was an associate at White & Case’s Washington, D.C. office from 2000-2001 and before that he was Managing Partner at Abu Ghazaleh Intellectual Property from 1992-1997.

Sufian has published the following articles: